Sujangarh can be marked as a temple town for the innumerable temples scattered across the city’s stretch and its neighbourhood areas. Salasar Balaji Temple in Salasar, Digambar Jain Temple in Ladnun and Venkateshwar Tirupati Balaji Temple in Ratangarh are only a few to mention among the several temples located in and around the expanse of the city. Digambar Jain Temple is a revered and holy destination for the Jain community and it is located in Ladnun town of Nagour district in Rajasthan not very far from Sujangarh and can be easily accessed from Jaipur via the rail route to Delhi. 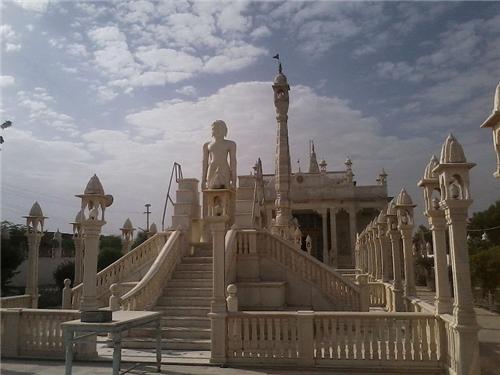 Thousands of devotees and followers of Digambar sect visit and worship at the Digambar Jain Bara Mandir in Ladnun town and the temple is a treasure trove of lovely idols of Jain Tirthankaras which are of great aesthetic value, inscribed columns or pillars, ancient artifacts and Jain Dharma manuscripts dating back centuries and of great artistic value. The architecture of the temple built from white marble is magnificent and the temple houses the shrine or idol of Lord Shantinathji, the sixteenth Jain Tirthankara who is grounded on an elevated platform or Vedi. The idol is guarded by two marble columns with engravings known as Toran Dwar and the shrine itself is splendour to behold crafted from marble measuring 94x70 centimetres. 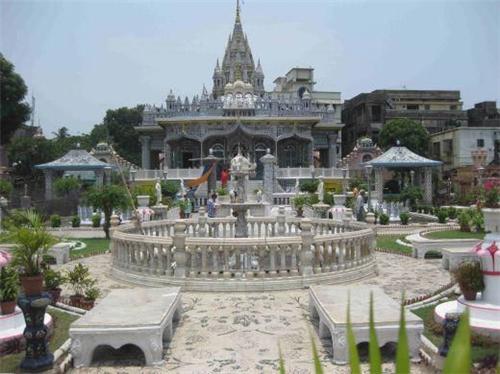 The pillars are crafted with great precision and two figurines of goddess Saraswati are embossed onto them and on the Toran Dwar or main entrance to the temple is an engraving etched onto the pillars indicating the temple’s foundation. The temple is over 1000 years old founded on Ashad Shukla 8 Samvat 1136. The second chamber houses the idol of Lord Ajithnathji , the second Jain Tirthankara along with an inscription etched on the base indicating a date Baishak Shukla 13, Samvat 1209. The idol is made from marble measuring 74x60 centimetres and two similar columns inscribed with figurines of Jain Tirthankaras.

Inside the temple, there is a beautiful art gallery housing 166 figurines carved from marble and the idol of Lord Rishabhdeva carved out of brown stone along with an idol of Lord Neminathji and other figurines made from metal. These were excavated from vicinities of Ladnun and placed in the art gallery for display. The temple is a recommended for every tourist not only for its divinity but for its undiminished aura and pristine holiness that has continued over centuries.

Explore more about Tourism in Sujangarh